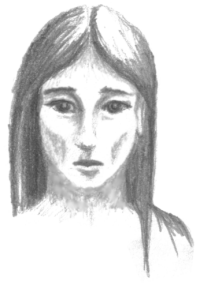 My hesitation softens the expression of the interviewer. Total silence in the audience. They’re listening. Hundreds of people staring down at me from the tiers of seats.

I say, Well, sooner or later this will come out I suppose….

I take the plunge and go on, It’s down to my having the attention span of a butterfly. There I was in the assembly hall, my first day at secondary school. I looked around and everyone had gone. I missed my name being called. Someone took me to my classroom and I sat in the only seat left.

Next to a girl.

We were twelve. It was 1970. Nobody sat next to the opposite sex those days; we were both embarrassed. I asked her name, she said Victoria.

She said, no, Victoria.

That’s all I remember.

I suppose she was there every day for morning registration; maybe we talked again. One day I realised she wasn’t there and dimly remembered I hadn’t seen her for some time. It didn’t matter.

Well … not until about three years later when I realised the growing pain inside me was something to do with her. By that time everyone else had forgotten her; no one remembered what village or town she’d moved to.

My pain grew. It’s still growing. I left school at sixteen to find her. I sang as often as I could, for free, in schools everywhere. I wanted to see her in the audience, meet her, find out what was going on. I mean, I can’t love her; I don’t know her. I’m not obsessed with any fantasy of her … I don’t have one. That started five years ago so I only do universities now. She’ll have moved on. I’d love to see her again just to say hi,  see if she’s alright, maybe have a cup of tea together and put a stop to this tortured emptiness. Then I could get on with my life.

My Interviewer, Lady Fielding, head of the music faculty, smiles at my words. I think she’s a bit confused and touched. Her attention flicks to the end of the stage behind me. She frowns. A scary hard frown. A breach of protocol frown.

I turn. Victoria stands hesitant on the stage. She’s still thin and gawky, with  the straightest, blackest hair I’ve ever seen, the narrowest bony nose, the darkest eyes, the huge depths of something behind them: something already a part of me.

I don’t remember standing up. I’m weak and disoriented. Victoria walks forward slowly, like she’s ready to run away. She’s barefoot. I think she must have taken her shoes off to run. A single shoe hangs from her right hand. When we make eye contact, the shoe drops.

This site uses Akismet to reduce spam. Learn how your comment data is processed.