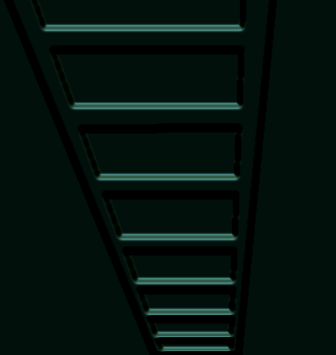 There are only two things here, an infinite black void and a ladder that goes on for ever. A cruel ladder. It reaches up and down beyond my sight. It always has. Some may say that I am here too: a third thing, but don’t be fooled. Just using the word ‘I’ is a mistake. The ladder teaches that ‘I’ means something rather less than you may believe.

I climb. For how long have I climbed? I neither know nor care. You may ask how can I see the ladder if there is no light source in a black void? And there is the truth, a grain of it. Every question is an attempt to climb – in this case from ignorance to wisdom. Yes, you are climbing too. Look away; deny the truth while you can. Pretend you can do something else, be something other than the little thing in the void climbing the ladder.

Why climb? Why not descend? I don’t know.

Nobody wants to go down.

Stopping is failure, a waste of all that effort, an admission that what you have done is for nothing. Descending is a destruction of your effort. So you go on, up. Do you ever stop asking questions? No. You will when your questions let you down and reveal the answers.

Wise up, cheer up, rise up: up, up, up. Up is a popular word. Another giveaway is the sheer number of things that you can ascend, the career ladder, league tables – even mountains. There’s something for everyone. Why?

There is no limit to how far I can ascend this ladder but so what? Nothing changes. I may have climbed for aeons. I remain in a black void with the ladder stretching up and down for ever. Once I thought it was hope that made me go up. Hope that I would change something: get somewhere.

It’s not hope. Sooner or later I realised that there is no destination, nothing to hope for, nothing will change. There is no point in climbing. But still I climb; I have no control. I cannot stay still and that hurts. What is a human without choice? We can’t say ‘I’ any more – that implies independence, power over ourselves. The anguish comes from humiliation and the loss of my fantasy, my delusion: I do not have choice and never did.

A horrifying truth. You believed in yourself; you learnt about yourself and you wish you hadn’t

All that’s left is a little point of suffering that climbs for no reason, for ever: because it must.

This site uses Akismet to reduce spam. Learn how your comment data is processed.