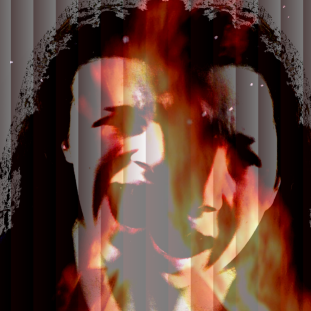 Department of Language and Linguistics.

I regret to inform you that we can no longer pursue the research you requested and strenuously advise you abandon the entire subject.

It’s a complicated issue but involves, among other frightening things, the disappearance of a colleague. Sharon began studying the earliest writing from India, through Tibet and China etc. She drew in other experts – though I’ve put an emphatic stop to any further research on this issue. About ten days after Sharon started your project I was able to begin working on medieval Europe, Africa and the Middle East.

After several weeks of research Sharon became increasingly taciturn, withdrawn and finally haggard. She’s not been seen for two days. Friends and family are understandably distraught.

I suspect I know what’s happened to her – and a terrible possibility emerges.

Despite your brief I think we are not looking at mere nightmares and hallucinations but fiends and demons [among many other names] as classical, medieval and other writers refer to them.

I believe Sharon passed you some of her early notes: mine will be destroyed shortly. I have found out a little more and managed to clarify some things – though I’m not sure you should read the next paragraphs. If they appear unscientific, please bear in mind that I am not at my best and under unendurable pressure.

The hallucinations come in at least three forms and are tailored exactly to the victim’s personal weaknesses.

Common themes are terror, humiliation and finally exhaustion and despair.

The first phenomena are attrition dreams in which you never keep up with events, always slightly failing: you wake up shattered. Then it happens the next night and the next and so on. The victim eventually takes extreme measures to avoid sleeping. The outcome is inevitably going to be sleep-deprivation psychosis, exhaustion or tragedy.

I’ve not experienced the second phenomenon. If I understand it correctly, you are trapped in a dream, aware that you are dreaming but can’t wake at all. I suppose the dream must become your reality at that point. The attack keeps you terrified and tormented – and powerless to resist.

The third is perhaps the most horrific because the demons so clearly enjoy and benefit from torturing people. As the victim loses the will to resist, or even live, the fiends grow bolder and stronger. Once you are sufficiently traumatised they also appear while you are awake. No one else can see them and they attack people around you. They have many means at their disposal to inflict damage be it mental or physical. You can stop the fiends, and that’s the cruelest element. You end up wanting to, or actually fighting things which people nearby cannot see. The demons work in gangs and it is simply impossible to take them all on. Of course, that’s all part of the humiliation. Observers react with terror and assume you are violently insane – while the gang taunts and watches you exhaust yourself. Being seen as dangerous and mentally ill – even possessed – will inevitably destroy your social credibility, friendships and family relationships. I think this is part of the process, though the ultimate goal may be the victim’s suicide or some form of domination after will and self-esteem collapse.

From what did your interest in this originate? I assume it was a reference or manuscript. More importantly, what made you want to have this researched further? Was it something in a dream related to that reference or document? That would make a metaphysical and vaguely logical connection.

Much of the material I’ve studied suggests these monsters feed on human suffering. Their principle means of accessing victims is to bring attention to themselves. Merely suspecting their existence is, probably, not enough. However, once you have immersed yourself in the various pieces of surviving literature you may see them in your dreams. Then they have you. It is impossible to escape after that. Destroy this letter, Sharon’s notes and anything that originally sparked your interest. Attempt to forget all this and acquire some strong sleeping tablets as a matter of extreme urgency. I fear it may already be too late for me.